In this page we collect proposals and design discussion for reorganising the packages that come with compilers, and the contents of those packages.

None of the ideas herein are claimed to belong to any particular person, many of the ideas have been extracted from mailing list discussions, eg.

Some of the points are GHC-specific. Please feel free to insert points specific to other compilers.

It may not be possible to fully achieve these goals (in particular, backwards compatibility), but that does not mean we should not aim for them.

What is in the Core Packages?

The Core Packages are installed with every conforming Haskell implementation. What should be in the Core? There is a tension:

Bulat: i think that all regex packages should be included and of course libs that helps testing. overall, it should be any general-purpose lib that porters accept (enlarging this set makes users live easier, and porters live harder)

about unix/win32 - these libs provide access to OS internals, not some everywhere-portable API. moreover, other world-interfacing libs (i/o, networking) should use APIs provided by these libs with a conditional compilation (CPPery) tricks in order to provide portable APIs! current situation where such libs use FFI isn't ideal. WinHugs size problem is rather technical - it includes a lot of DLLs which contains almost the same code

i agree to start with minimal stub, and then proceed with discussing inclusion of each library. what we need now is requirements to include library in this set and lifetime support procedure. so:

Requirements to libraries to be included in core set

The base package is a bit special

Thinking of GHC alone for a moment, we could have a package ghc-base (which is pretty much the current base) and a thin wrapper package base that re-exposes some, but not all, of what ghc-base exposes. To support this re-exposing, we need a small fix to both GHC and Cabal, but one that is independently desirable.

Similarly, Hugs could build hugs-base from the same souce code, by using CPP-ery, exactly as now. The thin base wrapper package would not change.

To make base smaller, we could remove stuff, and put it into separate packages. But be careful: packages cannot be cyclic, so anything that is moved out can't be used in base. Some chunks that would currently be easy to split off are:

Some other things, such as arrays and concurrency, have nothing else depending on them, but are so closely coupled with GHC's internals that extracting them would require exposing these internals in the interface of base.

Bulat: my ArrayRef library contains portable implementation of arrays. there is only thin ghc/hugs-specific layer which should be provided by ghcbase/hugsbase libs. except for MPTC problem (IArray/MArray classes has multiple parameters), this library should be easily portable to any other haskell compiler

Other non-core packages would probably have their own existence. That is, they don't come with an implementation; instead you use cabal-get, or some other mechanism, such as your OS's package manager. Some of these currently come with GHC, and would no longer do so

Bulat: i propose to unbundle only graphics/sound libs because these solves particular problems and tends to be large, non-portable (?) and some are just legacy ones - like ObjectIO. we should keep everything small & general purpose, including HUnit, arrows, fgl, html and xhtml, and include even more: ByteString, regex-*, Edison, Filepath, MissingH, NewBinary, QuickCheck, monads

We should separate out package-specifc tests, which should be part of the repository for each package. Currently they are all squashed together into the testsuite repository.

Currently GHC installs a set of packages by default, the so-called GHC Boot Packages. They are graphed here, with arrows representing dependencies between them: 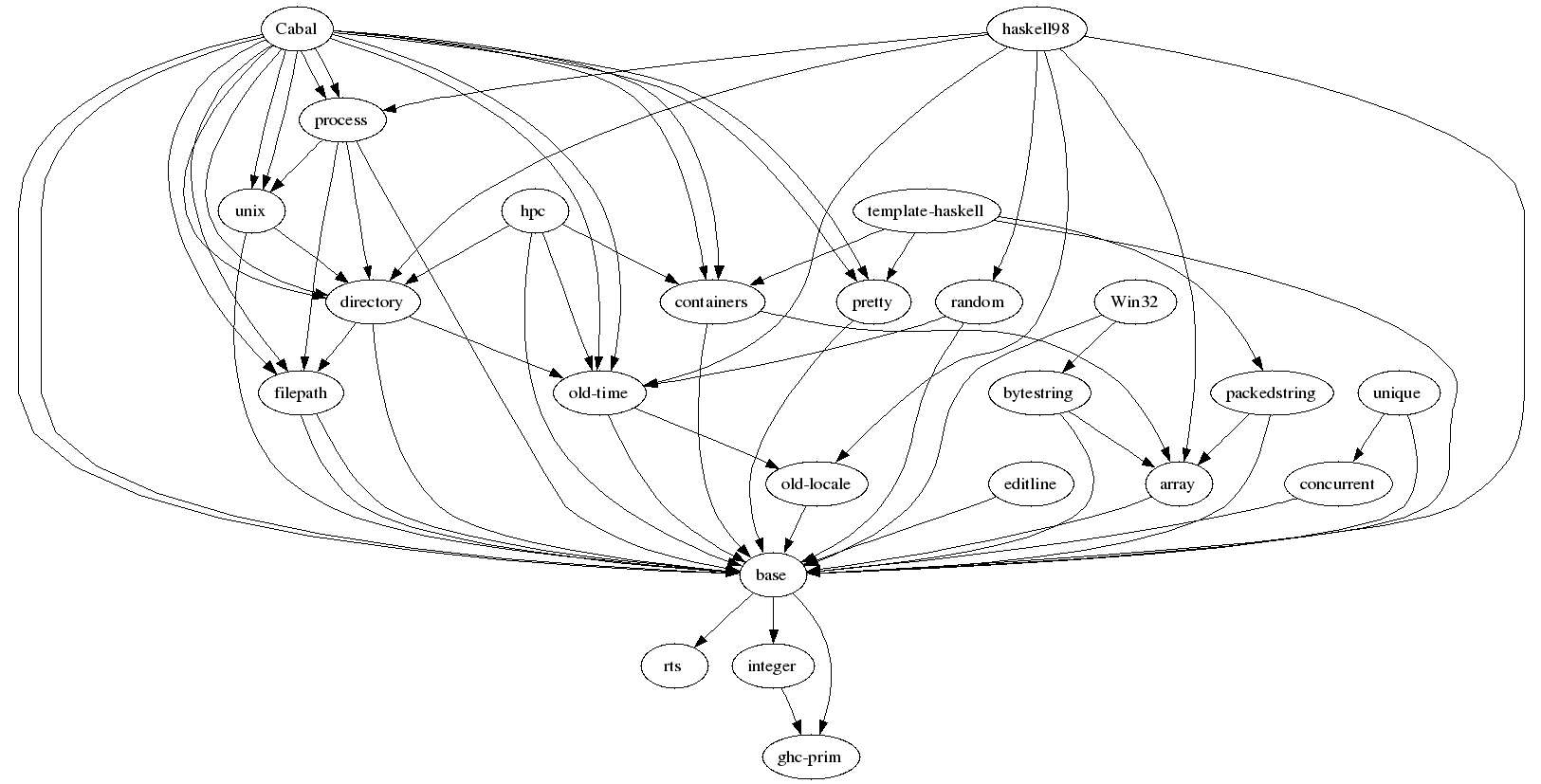 These are exactly the libraries required to build GHC. That shouldn't be the criterion for the core packages.

Every GHC installation must include packages: base, ghc-prim, integer and template-haskell, else GHC itself will not work. (In fact haskell98 is also required, but only because it is linked by default.)

So GHC's Install Packages would be the Core Packages plus

You can upgrade any package, including base after installing GHC. However, you need to take care. You must not change a number of things that GHC "knows about". In particular, these things must not change

GHC knows even more about some things, where you must not change

The latter group are confined to packages base and template-haskell.

(Note: a few other packages are used by tests in GHC's test suite, currently: mtl, QuickCheck. We should probably eliminate the mtl dependency; but QuickCheck is used as part of the test infrastructure itself, so we'll make it a GHC Boot Package.)

Recent distributions of Hugs come in two sizes, jumbo and minimal. Minimal distributions include only the packages base, haskell98 and Cabal. (Hugs includes another package hugsbase containing interfaces to Hugs primitives.) The requirements for this set are to

(Currently cpphs is a Haskell 98 program, so the latter implies the former.)

It should be possible to upgrade even the core packages using Cabal.