The block allocator is where the storage manager derives much of its flexibilty. Rather than keep our heap in a single contiguous region of memory, or one contiguous region per generation, we manage linked lists of memory blocks. Managing contiguous regions is difficult, especially when you want to change the size of some of the areas. A block-structured storage arrangement has several advantages:

The concept relies on the property that most data objects are significantly smaller than a block, and only rarely do we need to allocate objects that approach or exceed the size of a block.

We want to allocate memory in units of a small block (around 4k, say). Furthermore, we want each block to have an associated small structure called a block descriptor, which contains information about the block: its link field, which generation it belongs to, and so on. This is similar to the well-known "BiBOP" (Big Bag of Pages) technique, where objects with similar tags are collected together on a page so as to avoid needing to store an individual tag with each object.

We want a function Bdescr(p), that, given an arbitrary pointer into a block, returns the address of the block descriptor that corresponds to the block containing that pointer.

There are two options:

We adopt the second approach. The following diagram shows a megablock: 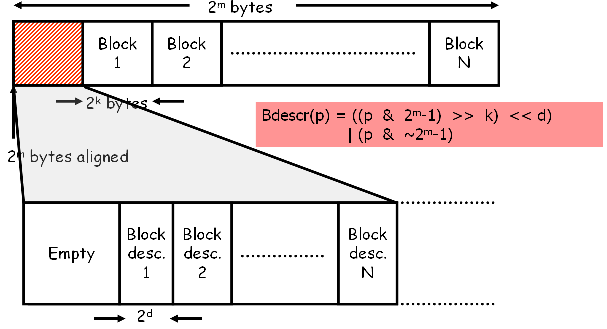 Block descriptors are currently 32 or 64 bytes depending on the word size (d = 5 or 6). The block descriptor itself is the structure bdescr defined in includes/rts/storage/Block.h, and that file also defines the Bdescr() macro.

The block allocator has a the following structure: