Layout of the stack

The stack consists of a sequence of stack frames (also sometimes called activation records) where each frame has the same layout as a heap object:

There are several kinds of stack frames, but the most common types are those pushed when evaluating a case expression:

The info table for a stack frame has a couple of extra fields in addition to the basic info table layout. A stack-frame info table is defined by StgRetInfoTable in includes/rts/storage/InfoTables.h. 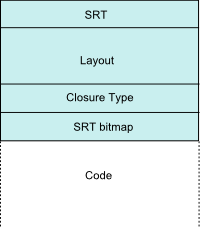 The SRT field points to the static reference table (SRT) for this stack frame (see Commentary/Rts/Storage/GC/CAFs for details of SRTs).

Layout of the payload

Unlike heap objects which mainly have "pointers first" layout, in a stack frame the pointers and non-pointers are intermingled. This is so that we can support "stack stubbing" whereby a live variable stored on the stack can be later marked as dead simply by pushing a new stack frame that identifies that slot as containing a non-pointer, so the GC will not follow it.