A few weeks before the first alpha release the release manager should contact the core library upstream maintainers to determine which core library versions will ship with the new GHC release. See WorkingConventions/BootLibraries for details. 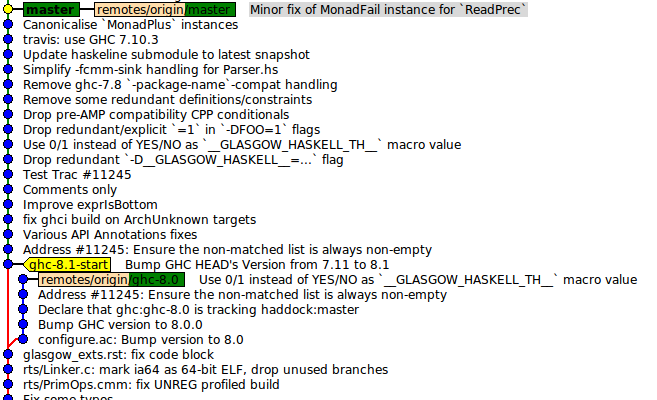 Example for result of branching procedure described above

In docs/users_guide, add a $VERSION-notes.rst file and write the release notes.

Add a corresponding entry to the table-of-contents in index.rst.

Ensure that the changelogs in libraries/* are up-to-date. In particular note that several of the packages included in the ghc tree have their versions tied to ghc's version. Find these with git grep libraries/ ProjectVersion and ensure their changelogs include the new version.

Update the ANNOUNCE file in the root of the tree.

In the AC_INIT line of configure.ac, set the version number. A few lines below, set RELEASE=YES.

It's also good practice to update the config.guess and config.sub files scattered about the tree (currently in the root, libraries/base, and libraries/integer-gmp) from upstream (config.guess, config.sub). These can be easily updated by running the update-autoconf.sh script in ghc-utils from the root of the source tree.

You may also want to update the llvm-targets file: utils/llvm-targets/gen-data-layout.sh > llvm-targets. Note that non-Apple clang releases lack the iOS targets so be sure to preserve these.

In the case of release candidates an unannotated tag is sufficient (e.g. git tag ghc-7.10.2-rc1 HEAD).

First check out the branch, and ensure that the version number and RELEASE near the top of configure.ac are correct. Then:

It is advisable to use a machine with as recent an autoreconf as possible; in particular, 2.61 is known to make a configure script that doesn't work on Windows.

N.B. the lndir utility required by make sdist is provided by xutils-dev on Debian.

Sending it to binary packagers

We currently produce binary distributions for the following environments,

First, you should make sure your environment has all of the tools necessary to make a proper release build. This can include more tools than an "ordinary" build of GHC requires, since documentation requires extra tools. You will need:

A good sanity check is to check the output of configure and make sure all of the tool fields are filled out.

Untar the src tarball. Then:

(Note that BeConservative is only relevant on Linux, as it controls usage of clock_gettime in the RTS.)

The compare tool compares the tarballs of different releases, and warns about possible problems:

Check that the build can build the release

Install the release, set your $PATH, then just untar and:

To ensure that users can verify the authenticity of downloaded release artifacts, we offer detached gpg signatures and SHA{1,256} hashes of the tarballs. These are generated with,

Be sure that your public key has been uploaded to a few well-known public keyservers.

Create and upload the library documentation

Sanity check http://www.haskell.org/ghc/docs/<<VERSION>>/. In particular, check that the libraries docs include both Win32 and unix.

In the http://www.github.com/haskell-infra/ghc-homepage git repository, create a download_ghc_<<MANGLED_VERSION>>.shtml page based on the previous one.

Sanity check http://www.haskell.org/ghc/download_ghc_<<MANGLED_VERSION>>. In particular, check that the release notes and documentation links work. Ensure release is in "news" section of index.html.

Push your changes to webhost.haskell.org (TODO site should pull from git repo).

Add the release to "Versions" in the trac admin section, and make it the default version.

Update "Current Stable Release" in download.shtml, and move the previous release down to "Older Releases".

Mail ANNOUNCE with the subject [ANNOUNCE] GHC version $version to,

For an RC, a smaller message is sent to just glasgow-haskell-users@haskell.org, e.g.:

There are a variety of things that should also be done,

TODO FIXME Normally Herbert and upstream maintainers take care of this - we always attempt to have full releases for all package by the time the final release happens (although not necessarily so for an RC - they may ship slight interim states).

Heuristic for detecting submodule libraries which have no proper release:

The listing above shows submodules which point to submodules that have no *annotated* tag, and which need further investigation. In some cases the tag just wasn't propagated from the upstream repo into our local Git mirror.