This page presents motivation and technical details behind implementing new primitive comparison operators (this was originaly reported as Trac ticket #6135 (closed)). See this page for instructions how to adjust your already existing code to work with new primops.

This kind of code is common in image processing (and array programming in general) where one needs to check whether the (x,y) coordinates are within the image. Primitive comparison operators <# and >=# have type Int# -> Int# -> Bool. Logical OR operator (||) is defined as:

During compilation definition of (||) gets inlined (assuming the optimizations are turned on) and then case-of-case transform is performed successively. This results in following Core (cleaned up for clarity):

and in following assembly code:

There are five possible branches to take, although four of them have the same result. This is caused by code duplication introduced by case-of-case transform (see this blog post for a step by step derivation). According to Ben Lippmeier, who submitted the original bug report, mis-predicted branches are bad in object code because they stall the pipeline.

Note: this example was produced with GHC 7.6.3. At the moment of merging new primops into HEAD, there was no code duplication at the assembly level when using old primops. However, avoiding code duplication is not the main problem new primops are meant to solve. That problem are conditional branches.

This problem was solved by modifying comparison primops to return unboxed unlifted Int# instead of Bool, which is lifted and thus must be inspected with a case expression. Having Int# returned as a result of logical comparison allows to use branchless bitwise logical operators instead of branching logical operators defined by Haskell.

With the new primops we can rewrite the original expression that motivated the problem:

Let's analyze how that code gets compiled by the LLVM backend. For purposes of this analysis I will convert the above case expression to the following function:

By dumping intermediate Cmm representation we can determine how variables are mapped to CPU registers. Arguments are passed to the function using a stack:

R2 contains the first argument x, R3 contains y, R4 contains width and R5 contains height. We can verify that by looking at the body of Main.f_info:

Mappings between Cmm's R(2/3/4/5) registers and machine registers are defined in includes/stg/MachRegs.h:

Knowing that we can dump the assembly generated by LLVM backend:

Let's analyze line by line the part responsible for evaluating the scrutinee:

Below is a summary of implementation details and decisions:

Below is a benchmark for the proof-of-concept branchless filter function that demonstrates performance gains possible with the new primops:

Compile and run with:

Benchmarking shows that filterN function is about 55-65% faster than the filter function based on stream fusion (tested for unboxed vectors containing 10 thousand and 10 million elements). Below is an example benchmarking report from criterion: 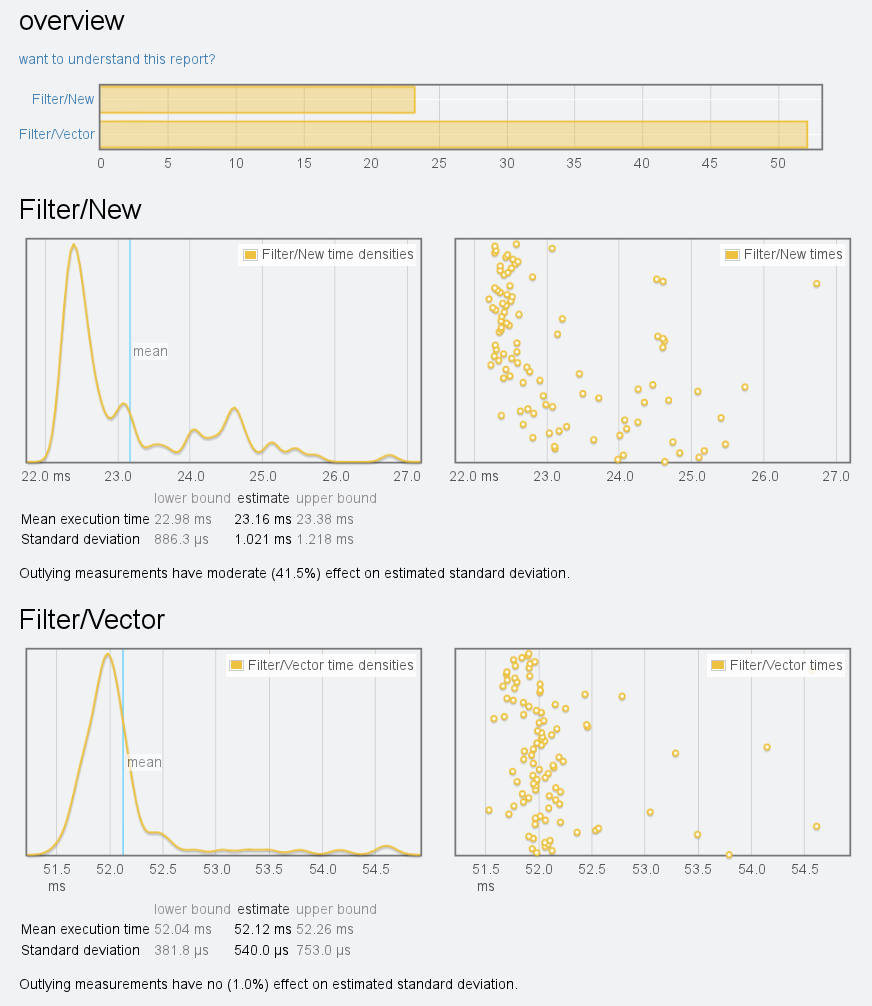