The information on this page is slightly out of date; see GitRepoReorganization and #8545 (closed) for latest news

Many of the libraries and tools in a GHC tree are actually maintained by someone else. They therefore have a separate upstream repository, from which we need to pull. That repository may be either a darcs or a git repository; in the darcs case, we also need to convert to a git repository for use in a GHC tree. However, if the darcs repository is on another server, then we first need to mirror it for the conversion program to use. This diagram shows how changes migrate from one repo to another: 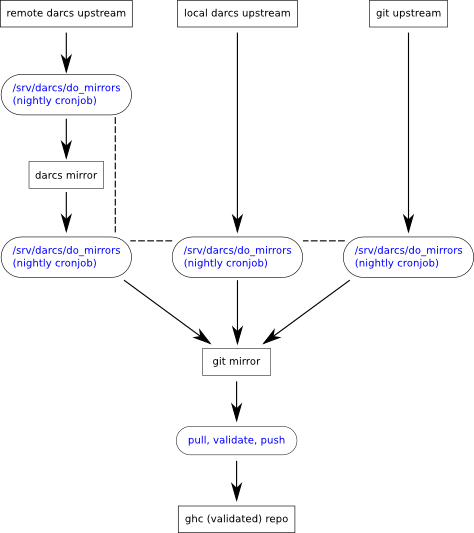 This means that when making changes needed in GHC to one of these libraries, we first need to put the changes in the upstream repository. Note that a git hook prevents you from pushing patches to the ghc repos until they are already in the git mirror repos, so that we cannot forget to send changes upstream.

The mirrors are updated automatically each night, but you can force an immediate update by running /srv/darcs/do_mirrors on darcs.haskell.org.

Note that the following table might be out of date, please refer to GHC's packages file which is always up to date as otherwise scripts will break.

Moreover, the list of upstream Darcs repos mirrored as Git repositories can be found here.

Here is where the upstream repositories are, and their mirrors. The master repository is identified in green.

Modifiying libraries for which there is an upstream repository

The process for updating libraries for which there is an upstream repo is a a little more complicated than for libraries where the repo is part of the GHC setup:

Note that these two objectives are to some extent in conflict: If a change in GHC or one of its libraries requires a change in a library with an upstream repo then, in order to satisfy objective 1, the maintainer would need to apply the patch, but if doing so is currently inconvenient for them then this would fail objective 2. This policy therefore tries to find the best compromise, without being too onerous for any party.

For these repositories, we use a "git submodule" rather than a normal repository. Using submodules means that the repository doesn't need to follow a linear path through the git history, but can instead jump around, for example from a release commit on one branch to the next release commit on a different branch.

From the GHC developer's point of view

If you are not modifying these packages then you don't need to do anything special: A regular git submodule update will update the submodules as normal. However, you may find it useful to run

or each time you run git status or git diff, git will check for changes not only in the GHC repository, but also in all the submodules. (you must have git >= 1.7.3 for this to work).

If you need to modify one of these libraries, then ordinarily you should first send the modifications upstream. Ideally upstream will apply the patches and make a release (the easiest way to accomplish objective 1 is for changes to be applied upstream first, so that they can't be forgotten about after being applied to GHC's repo). You can then update GHC's submodule by running

There are some scenarios where you may need to modify GHC's repository without the upstream repository already having the change that you need:

In order to make the change in this case, you

From the upstream maintainer's point of view

Upstream maintainers don't need to do anything special. You can continue to use any version control system and whatever branching policy works best for you. However, there are two issues to be aware of: