GHC 6.12.2 will also be included in the upcoming Haskell Platform release (http://hackage.haskell.org/platform/). The Haskell platform is the recommended way for end users to get a Haskell development environment.

Meanwhile, in the HEAD, the last 6 months have seen more than 1000 patches pushed from more than a dozen contributors. As the following graph shows, tickets are still being opened faster than we can close them, with the total open tickets growing from around 700 to almost 800. We will be looking in the near future at improving the effectiveness of the way we use the bug tracker. 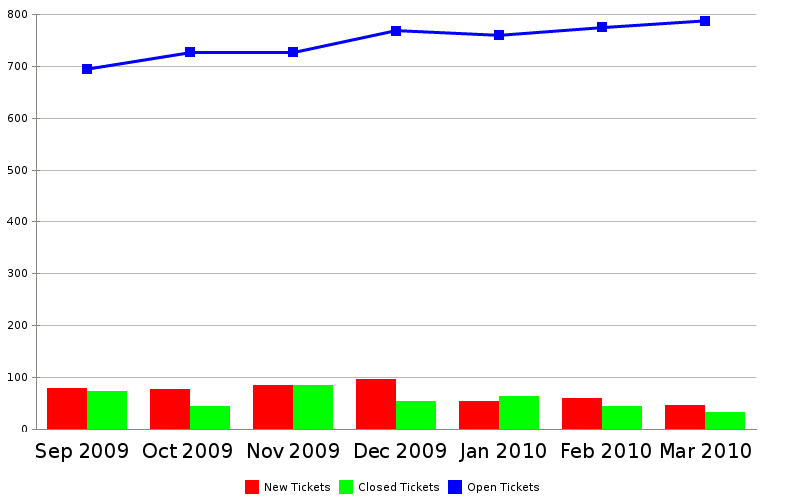 We have made only a few small language improvements. The most significant ones concern quasi-quotations, implementing suggestions from Kathleen Fisher:

Here's an example that illustrates both:

The second declaration uses the quasi-quoter called pads (which must be in scope) to parse the "...blah..blah..", and return a list of Template Haskell declarations, which are then spliced into the program in place of the quote.

Type families remain the the hottest bit of GHC's type system. Simon PJ has been advertising for some months that he intends to completely rewrite the constraint solver, which forms the heart of the type inference engine, and that remains the plan although he is being slow about it. The existing constraint solver works surprisingly well, but we have lots of tickets demonstrating bugs in corner cases. An upcoming epic (70-page) JFP paper "Modular type inference with local assumptions" brings together all the key ideas; watch Simon's home page.

One of GHC's most crucial optimisers is the Simplifier, which is responsible for many local transformations, plus applying inlining and rewrite-rules. Over time it had become apparent that the implementation of INLINE pragmas wasn't very robust: small changes in the source code, or small wibbles in earlier optimisations, could mean that something with an INLINE pragma wasn't inlined when it should be, or vice versa.

Another important related change is this. Consider

GHC will not fire rule "foo" because it is scared about duplicating the redex (flop x). However, if you declare that flop is CONLIKE, thus

This declares that an application of flop is cheap enough that even a shared application can participate in a rule application. The CONLIKE pragma is a modifier on a NOINLINE (or INLINE) pragma, becuase it really only makes sense to match flop on the LHS of a rule if you know that flop is not going to be inlined before the rule has a chance to fire.

GHC's back end has been a ferment of activity. In particular,

The downside is that the code base is in a state of serious flux:

There has been a lot of restructuring in the RTS over the past few months, particularly in the area of parallel execution. The biggest change is to the way "blackholes" work: these arise when one thread is evaluating a lazy computation (a "thunk"), and another thread or threads demands the value of the same thunk. Previously, all threads waiting for the result of a thunk were kept in a single global queue, which was traversed regularly. This lead to two performance problems. Firstly, traversing the queue is O(n) in the number of blocked threads, and we recently encountered some benchmarks in which this was the bottleneck. Secondly, there could be a delay between completing a computation and waking up the threads that were blocked waiting for it. Fortunately, we found a design that solves both of these problems, while adding very little overhead.

At the same time, we rearchitected large parts of the RTS to move from algorithms involving shared data structures and locking to a message-passing style. As things get more complex in the parallel RTS, using message-passing let us simplify some of the invariants and move towards having less shared state between the CPUs, which will improve scaling in the long run.

The GC has seen some work too: the goal here is to enable each processor ("capability" in the internal terminology) to collect its private heap independently of the other processors. It turns out that this is quite tricky to achieve in the context of the current architecture, but we have made some progress in this direction by privatising more of the global state and simplifying the GC data structures by removing the concept of "steps", while keeping a simple aging policy which is what steps gave us previously.

We completed a first release of the regular, multi-dimensional array library introduced in the previous status report. The library is called Repa and is available from Hackage [http://hackage.haskell.org/package/repa Repa package](http://hackage.haskell.org/package/repa Repa package). The library supports shape-polymorphism and works with both the sequential and parallel DPH base library. We discuss the use and implementation of Repa in a draft paper [ http://www.cse.unsw.edu.au/~chak/papers/KCLPL10.html Repa](http://www.cse.unsw.edu.au/~chak/papers/KCLPL10.html Repa). We have shown that Repa can produce efficient and scalable code for FFT and relaxation algorithms and would be very interested to hear from early adopters who are willing to try Repa out in an application they care about.

At the start of the year, Ben Lippmeier has joined the project. He has started to improve our benchmarks infrastructure and worked on Repa.

For some time, it's been clear to us that Buildbot is not the perfect tool for our nightly builds. The main problem is that it is very susceptible to network wibbles, which means that many of our builds fail due to a network issue mid-build. Also, any customisation beyond that anticipated by the configuration options provided requires some messy python coding, poking around inside the buildbot classes. Additionally, we would like to implement a "validate-this" feature, where developers can request that a set of patches is validated on multiple platforms before being pushed. We couldn't see an easy way to do this with buildbot.

When the darcs.haskell.org hardware was upgraded, rather than installing buildbot on the new machine, we made the decision to implement a system that better matched our needs instead. The core implementation is now complete, and we have several machines using it for nightly builds.