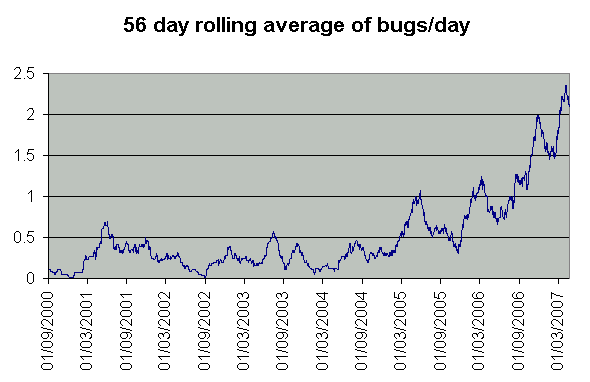 You could interpret these figures as saying that GHC is getting steadily more unreliable! But we don't think so...we believe that it's mostly a result of more people using GHC, for more applications, on more platforms.

As a result of this heavy usage, it has taken us nearly six months to stabilise GHC 6.6.1, fixing over 100 reported bugs or infelicities in the already-fairly-solid GHC 6.6.

The HEAD (which will become GHC 6.8) embodies nine months of development work since we forked the tree for GHC 6.6. We are now aiming to get a stable set of features implemented in the HEAD, with a view to forking off the GHC 6.8 branch in the early summer. As our last HCAR report indicated, there will be lots of new stuff in GHC 6.8. The rest of this entry describes the features that are likely to end up in 6.8.

You can find binary snapshots at the download page http://www.haskell.org/ghc/dist/current/dist/ or build from sources available via the darcs repository (http://darcs.haskell.org/ghc/).

A less successful feature of the last year has been the story on impredicative instantiation (see the paper Boxy types: type inference for higher-rank types and impredicativity). The feature is implemented, but the implementation is significantly more complicated than we expected; and it delivers fewer benefits than we hoped. For example, the system described in the paper does not type-check (runST $ foo) and everyone complains. So Simon PJ added an even more ad-hoc extension that does left-to-right instantiation.

The power-to-weight ratio is not good. We're still hoping that Dimitrios Vytiniotis and Stephanie Weirich will come out with a simpler system, even if it's a bit less powerful. So don't get too used to impredicative instantiation as it now stands; it might change!

Peng Li, from the University of Pennsylvania, spent an exciting three months at Cambridge, working on a whole new architecture for concurrency in GHC. (If you don't know Peng you should read his wonderful paper Combining Events And Threads For Scalable Network Services on implementing a network protocol stack in Haskell.) At the moment GHC's has threads, scheduling, forkIO, MVars, transactional memory, and more besides, all "baked into" the run-time system and implemented in C. If you want to change this implementation you have to either be Simon Marlow, or else very brave indeed. With Peng (and help from Andrew Tolmach, Olin Shivers, Norman Ramsey) we designed a new, much lower-level set of primitives, that should allow us to implement all of the above in Haskell. If you want a different scheduler, just code it up in Haskell, and plug it in.

Peng has a prototype running, but it has to jump the "Marlow barrier" of being virtually as fast as the existing C runtime; so far we have not committed to including this in GHC, and it certainly won't be in GHC 6.8. No paper yet, but look out for a Haskell Workshop 2007 submission.

There have been some big developments in the programming environment: