Lots has happened on the GHC front over the last few months. We released GHC 6.8.1 on 3 November 2007. GHC now has so many users, and such a large feature "surface area", that simply getting to the point where we can make a release is becoming quite a challenge. Indeed, a good deal of our effort in the last six months has been in the form of consolidation: fixing bugs and solidifying what we have.

These graphs show "tickets" which include bugs, feature requests, and tasks. Of the "open tickets", about half are bugs. Notice the big spike in "closed tickets" just before the 6.8.1 release! 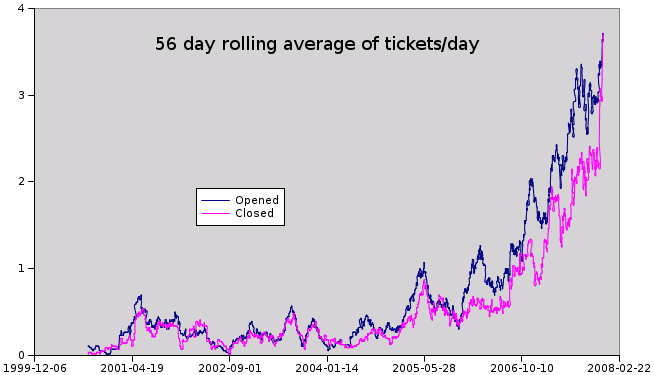 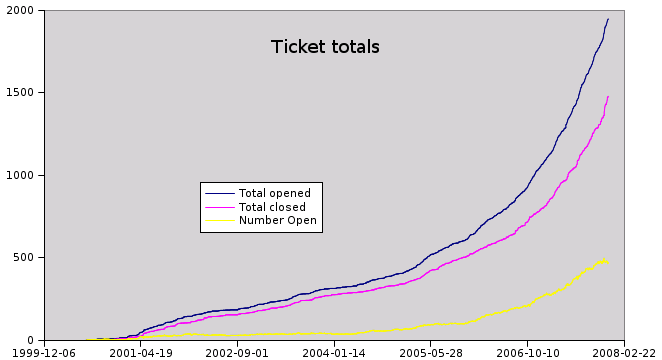 The major new features of 6.8.1 were described in the last issue of the Haskell Communities Newsletter, so we won't repeat them here. Instead, here are some of the highlights of what we are working on now.

Several people have developed syntactic innovations, which are (or will shortly be) in the HEAD:

None of these changes tackle the deeper issue of whether or not Haskell's current approach to records is the Right Way; rather the changes just make the current approach work a bit better. Furthermore, they are all somewhat controversial, because they make it harder to see where something comes into scope. Let's see what you think!

The big innovation in GHC's type system has been the gradual introduction of indexed type families in the surface syntax, and of type equalities in the internal machinery.

Indexed data families (called "associated data types" when declared in type classes) are fairly simple, and they work fine in GHC 6.8.1. Indexed type families (aka "associated type synonyms") are a different kettle of fish, especially when combined with the ability to mention type equalities in overloaded types, thus:

Tom Schrijvers spent three months at Cambridge, working on the theory and implementation of a type inference algorithm. As a result we have a partially-working implementation, and we understand the problem much better, but there is still much to do, both on the theoretical and practical front. It's trickier than we thought! We have a short paper Towards open type functions for Haskell which describes some of the issues, and an wiki page that we keep up to date; it has a link to details of implementation status. This is all joint work with Martin Sulzmann, Manuel Chakravarty, and Tom Schrijvers.

Since 6.6 GHC has had support for running parallel Haskell on a multi-processor out of the box. However, the main drawback has been that the garbage collector is still single-threaded and stop-the-world. Since GC can commonly account for 30% of runtime (depending on the GC settings), this can seriously put a crimp in your parallel speedup.

Roshan James did an internship at MSR in 2006 during which he and Simon M worked on parallelising the major collections in GHC's generational garbage collector. We had a working algorithm, but didn't observe much speedup on a multi-processor. Since then, Simon rewrote the implementation and spent a large amount of time with various profiling tools, which uncovered some cache-unfriendly behaviour. We are now seeing some speedup, but there is more tweaking and measuring still to be done.

The other side of the coin is to parallelise the minor collections. These are normally too small and quick to apply the full-scale parallel GC to, and yet the whole system still has to stop to perform a minor GC. The solution is almost certainly to allow each CPU to GC its own nursery independently. There is existing research describing how to do this, and we plan to try applying it in context of GHC.

After many month of designing, re-designing, and finally implementing a vectorisation pass operating on GHC's Core intermediate language, we finally have a complete path from nested data parallel array programs to the low-level, multi-threaded array library in package ndp. We are very excited about having reached this milestone, but the path is currently very thin, complete unoptimised, and requires a special Prelude mockup. More work is required before vectorisation is ready for end-users, but now that the core infrastructure is in place, we expect more rapid progress on user-visible features.

Besides working on optimisations and completing the backend library, we still need to implement Partial Vectorisation of Haskell Programs and the treatment of unboxed types, which is crucial to vectorise the standard Prelude. Most of the code was written by Roman Leshchinskiy.

GHC's back end code generator has long been known to generate poor code, particularly for tight loops of the kind that are cropping up more and more in highly optimised Haskell code. So in typical GHC style, rather than patch the immediate problem, we're redesigning the entire back end.

What we want to do:

What we've done so far:

As a result, we now have lots of new code. Some of it is working; much of it is as yet un-integrated and un-tested. However, once we have it all glued back together, GHC will become a place where you can do Real Work on low-level optimisations, and code generation. Indeed John Dias (one of Norman's graduate students) will spend six months here in 2008 to do work on code generation.

In short, GHC's back end, which has long been a poor relation, is getting a lot of very sophisticated attention. Expect good things.

GHC ships with a big bunch of libraries. That is good for users, but it has two bad consequences, both of which are getting worse with time. First, it make it much harder to get a release together, because we have to test more and more libraries too. Second, it's harder (or perhaps impossible) to upgrade the libraries independently from GHC. There's a meta-issue too: it forces us into a gate-keeper role in which a library gets a big boost by being in the "blessed set" shipped with GHC.

Increasingly, therefore, we are trying to decouple GHC from big libraries. We ship GHC with a set of "boot" libraries, without which GHC will not function at all, and "extra" libraries, which just happen to come with some binary distributions of GHC, and which can be upgraded separately at any time. To further that end, we've split the "base" package into a bunch of smaller packages, and expect to further split it up for GHC 6.10. This has led to lots of pain, because old programs that depended on 'base' now need to depend on other packages too; see upgrading packages for details. But it's good pain, and matters should improve too as Cabal matures. We have been exploring possibilities for lessening the pain in 6.10. We have also devised a package versioning policy which will help future library upgrades.