This page describes how to easily setup Visual Studio Code (VSCode) for GHC development. This includes Language Server Protocol (LSP) support for Haskell and C files. The former is accomplished by using ghcide, the latter by ccls.

The whole procedure is very similar to that described for Spacemacs. If you miss somethings here, it might be on that other page. However, this page should be self-contained (with some links to other pages to reduce duplication in the wiki).

Some animations to demonstrate what you can expect:

Currently ghcide (ghc.nix argument: withIde = true;) is not supported by ghc.nix: https://github.com/alpmestan/ghc.nix#using-ghcide-%EF%B8%8F-currently-unavailable . Most of this page still applies, but you have to provide your own ghcide and bear binaries. ghcide must have been built with exactly the same GHC version you use to build your GHC project.

If you haven't already installed ghc.nix, please refer to the corresponding section on the Spacemacs page.

Create a shell.nix file your ghc source folder, that looks like this:

For the context of this page, only the argument withIde = true; matters. It makes sure that the resulting Nix environments contain the right ghcide executable.

The first time you call nix-shell in the ghc source folder, all dependencies are downloaded and (if needed) built. Building ghcide takes much time. Consider to enable cachix, a binary cache for Nix packages: spacemacs/cachix

Some source code files are generated during build.

Build GHC in the context defined by ghc.nix and shell.nix, e.g.

ccls needs a compile_commands.json (JSON Compilcation Database) file as configuration. This file is mostly a mapping of *.c filenames to C compiler arguments.

compile_commands.json is generated by bear, a tool that intercepts all calls to the C compiler. That means, you have to trigger a full (re-)build with bear, even if you already got a fully compiled GHC project.

Start VSCode in a ghc.nix/nix-shell environment

Install the ghcide plugin in VSCode. It's listed as an extension in the VSCode Market Place: https://marketplace.visualstudio.com/items?itemName=DigitalAssetHoldingsLLC.ghcide

Some goes for the ccls plugin: https://marketplace.visualstudio.com/items?itemName=ccls-project.ccls

Create two distinct workspaces for the GHC compiler and Hadrian.

The simplest way is to:

The folder of your GHC compiler workspace is the source root of the cloned GHC repository. The Hadrian folder, is hadrian/ in that previously described folder.

So, e.g. if your GHC source folder has the path /home/sven/src/ghc, then the two folders are:

Works out of the box! It automatically finds the compile_commands.json file and uses it as configuration.

The are the arguments to the ghcide plugin: Hic: Arguments (hic.arguments) and Hic: Executable Path (hic.executablePath). You have to set them per workspace, i.e. hic.arguments differs for the GHC compiler and the Hadrian workspace. 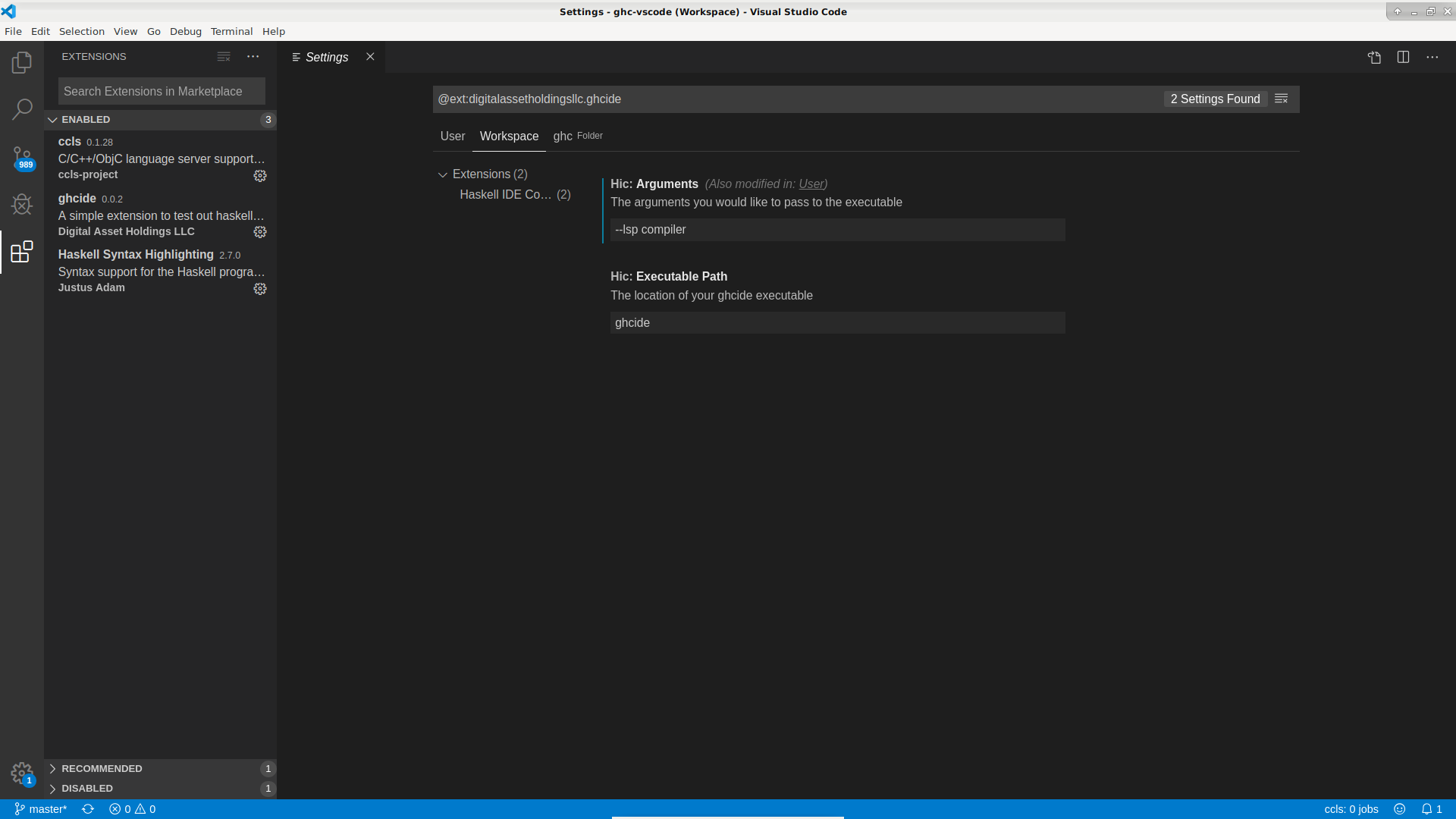 Please have a look at spacemacs/Troubleshooting. The first analysis steps are editor-agnostic.