The stack-layout phase decides where to spill variables. The important goals are to avoid memory traffic and to minimize the size of the stack frame. Both of these goals are accomplished by reusing stack slots.

For each stack slot, we introduce a new name, then treat the name as the addressing expression for the slot. At the end of the pipeline, we choose a stack layout, then replace each stack slot with its offset from the stack pointer. The benefit is that we break the phase-ordering problem: any phase of the compiler can name a stack slot.

For example, for a variable x, the expression SS(x) is the address of the stack slot where we can spill x. (I don't think we output any C-- that uses SS anymore, but the new code generator marks its stack slots prior to layout with young<k> + 4, etc. -- Edward) The stack is assumed to grow down, and we assume that the address SS(x) points to the old end of the slot. Therefore, to address the low address of a 4-byte slot, we would use the expression SS(x + 4). And we would spill x using the following instruction:

where m[e] refers to an address e in memory.

But what about parameter passing? We use a similar technique, but this time we describe the slot for each location as an offset within the area where the parameters are passed. For example, we lower a function call

into approximately the following C--:

We use the following types to represent stack slots and parameter-passing areas:

The Old call area is the initial state of the stack on entry to the function (the overflow parameters and the return address) as well as any arguments that will be passed to a tail call. (SLPJ believes that:) On entry to the function, register Sp contains the address of the youngest (lowest-address, highest offset) byte in the Old area.

Note that RegSlot areas are very small (since they only need to store a single register), while CallArea are contiguous chunks of arguments.

To name a specific location on the stack, we represent its address with a new kind of CmmExpr: the CmmStackSlot. A CmmStackSlot is just an integer offset into an Area.

Notice that a CmmStackSlot is an address, so we can say

to make Sp point to a particular stack slot. Use a CmmLoad to load from the stack slot. 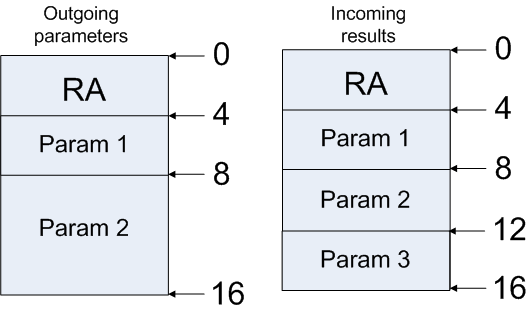 Currently, the intermediate code does not explicitly use a virtual frame pointer, but when we talk about offsets into the stack, we implicitly assume that there is a virtual frame pointer that points just off the oldest byte of the return address on entry to the procedures. Therefore, on entry to the procedure, the offset of the (4-byte) return address is 4.

Laying out the stack

which assigns a virtual stack slot (i.e. offset in bytes, relative to the virtual frame pointer) to each Area.

A naive approach to laying out the stack would be to give each variable its own stack slot for spilling, and allocate only the ends of the stack frame for parameter-passing areas. But this approach misses two opportunities for optimization:

We rewrite the stack slots in two passes:

The details are in cmm/CmmProcPointZ.hs (they have not yet been committed, but will be soon - Aug 4, 2008).